ImageSilo® is Now Hosted on AWS

September 2018 -  Cloud / ImageSilo / Video
Are You Concerned About the Security of Your Organization's Data?

Since 1999, ImageSilo has remained the industry leading on-demand Enterprise Content Management (ECM) system. Over the years, we’ve witnessed a sea of changes as software vendors moved to the "cloud". Conversations with customers and prospective customers back in 1999 and into the 2000s were considerably different than they are today as organizations with vision adopted ImageSilo and similar online services. Recall, this was when Amazon was only selling books and Google had just emerged!

Over the past 18 years, our customers have enjoyed 99.9973% uptime – an unheard of standard for such a lengthy period of time. In 2004, Amazon did something truly unique – they began offering their first Amazon Web Service (AWS). Their aim was to offer computing services to organizations on which to run their own applications. Today, AWS is considered the foremost provider of on-demand computing platforms.

Approximately four years ago, it finally became apparent that AWS had a widely accepted, highly scalable, and extremely fault-tolerant offering that could meet the needs of Digitech Systems and our customers. After much investigation, consideration, and deliberation, Digitech Systems came to the conclusion that AWS provided numerous benefits that would allow independent software developers such as ourselves to integrate AWS and ImageSilo and allow us to provide a next-generation computing platform to our customers.

The decision was made to move ImageSilo to AWS. The rapid advancement of technology, coupled with the unique, extensive experience we have gained over the last 18 years, puts us in a unique position to develop our next generation platform, which will give users the ability to effortlessly manage all of their content, and more importantly, intelligently drive the information in that content to its logical conclusion. 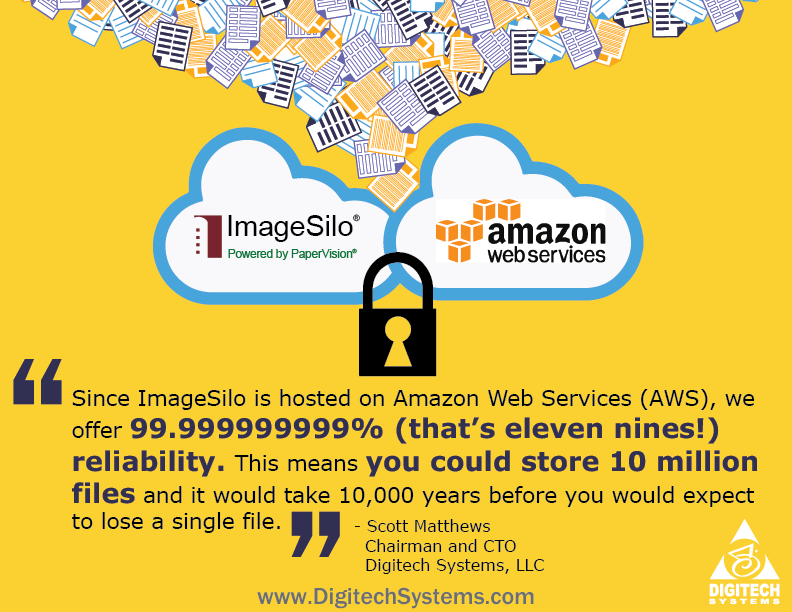 Check out this interview from our founder, Scott Matthews, as he discusses the move.